AL-QABISI: THE INTRODUCTION TO ASTROLOGY 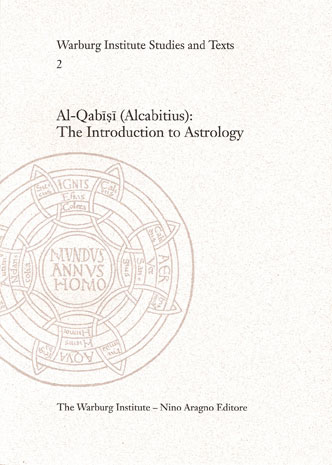 'Alcabitius’ owes his reputation to a single work: his Book of the Introduction to the Craft of Astrology, which survives in at least twenty-five Arabic manuscripts (two written in Hebrew script), and in a Latin translation of which there are more than two hundred manuscripts, and twelve printings between 1473 and 1521. The reputation of this text in the Islamic world was such that: according to the biographer, al-Bayhaqi (ca. 1106-74), it «ranked among the works on the stars like Hamasa among Arabic poetry». The Latin text received several commentaries, and was, in turn, translated into several of the European vernaculars. In the universities where astrology was taught (often as part of the curriculum in medicine), the Introduction was the first, and often the only, set text. Along with ‘Albumasar’, ‘Alcabitius’ became a household name as an authority in astrology. The present critical edition contains the Arabic text of the Introduction and the translation into English as well as the Latin versions of the original manuscripts.