COMMENTARY ON THE DAILY PRAYERS


edited by Giacomo Corazzol; with a Foreword by Giulio Busi 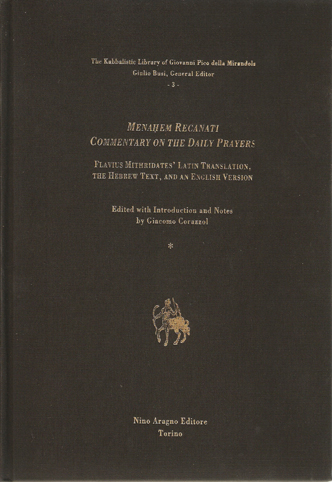 The Commentary on the Daily Prayers was the last effort undertaken by Recanati at the end of his life. In this book he pursued the interest that had also characterized his previous work, that is to use kabbalah as a hermeneutic device demonstrating how the measure of halakic norms coincides with the measure of the creation itself. This identification was aimed at restoring Judaism to its wholeness after the blows inflicted upon it by rationalistic philosophy. In Recanati’s hands, the liturgy and its texts become a mosaic whose single tesserae (their words and verses), rendered opaque by everyday recital, are given new radiance by being envisaged as mises en abîme of the mysteries connected to the sefirot and the celestial world. Recanati’s work deeply influenced Pico’s understanding of the kabbalah, particularly as regards the structure of the upper merkavah, its functioning, and its influence upon the creation – a model into which Pico tried to fit Christian theology, Neoplatonic theurgy, and other traditions as well.