THE BOOK OF BAHIR


edited by Saverio Campanini; with a Foreword by Giulio Busi 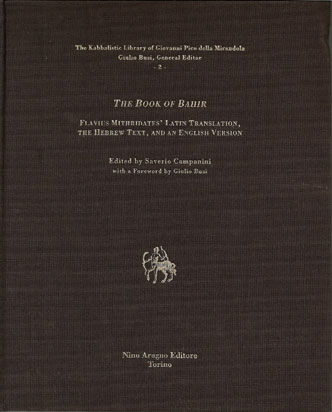 This booklet full of parables has served for centuries as a concise mystical encyclopedia of kabbalistic lore and has attained the status of an important source of religious inspiration. The Bahir is a collection of apologues, often sibylline, which stage oriental kings together with even-tempered princesses, stupid soldiers and smart administrators, passionate lovers and adorned brides. Short theoretical passages link the tales, and explain the invisible worlds by means of a celestial topography or with unusual metaphors, like the one of a huge tree able to touch the limits of the divine thought. Also the order of the sefirot are described with rich allegories, as, for instance, the succession of the letters of the alphabet, the relationships among the members of a family or even as forms of sexual attraction. Notwithstanding the presence of a few more ancient elements, it looks as if that one or more kabbalists edited the Bahir, as we know it, between the end of the 12th and the beginning of the 13th century. The Book of Bahir was explicitly mentioned by Count della Mirandola in his Conclusiones published in 1486 and represents a crucial source for understanding Pico’s thinking. In fact, there is a surprising similarity of themes and images between the symbolical world of the Bahir and the harmonizing philosophy of Pico.