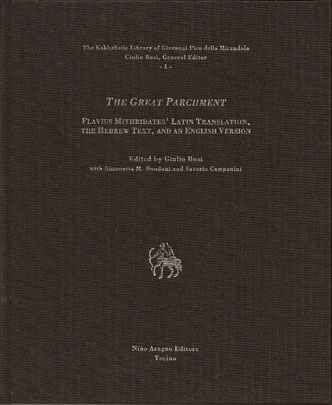 This is a text of a few extremely dense and symbolic pages. Some marginal annotations prove that Pico read it, perhaps with the assistance of Mithridates. The work was probably written at the beginning of the 14th century by an author whose name remains unknown to us. Most likely, he was an Italian kabbalist. The title Great Parchment refers to the physical appearance of the text. In fact, it was originally written on a large parchment scroll, together with drawings depicting the various stages of the emanation. In other words the written text was conceived as a commentary on the graphic representation of the sefirot, in a structure where theoretical analysis and visual depiction were intended as a unit. Notwithstanding the hermetic style, the Great Parchment is a forgotten masterpiece of kabbalistic literature. All together the work contains seventeen short tales, which offer a gallery of biblical characters conceived as actors in a sefirotic theater, like a scene where the sefirot wear the clothes and share the feelings of the protagonists of the Scriptures.